The "Vittoriale degli Italiani" (the shrine of Italian victories) is a monumental citadel that extends approximately nine hectares.
The poet Gabriele D'Annunzio created it between 1921 and 1938 in collaboration with the architect Gian Carlo Maroni to whom he entrusted the task of enclosing his "memories in the custody of stone," reserving the decoration. He surrounded a complex of buildings with a circle of walls reached by crossing streets and piazzas.
Just after the double entry arch overlooking Lake Garda is the large Amphitheater, site of a prestigious theater (1500 seats), that includes a new space for temporary thematic exhibitions. Two piazzas, the Esedra and the piazzetta Dalmata, lead to:

The Schifaworld Wing that includes:

The prow of the Puglia Ship, donated by the Marine Military in the 1925, set on a height and enhanced by a Winged Victory, work of the sculptor Renato Brozzi.
On the highest hill is the Mausoleum, tomb of D'Annunzio and memorial of the legionnaires. Votive kiosks, fountains and tree-lined streets make the Vittoriale a huge outdoor Museum. 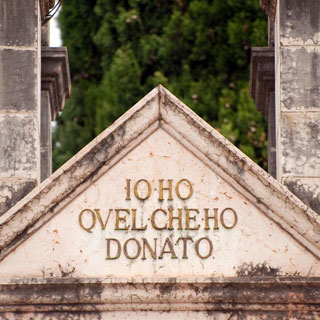